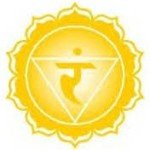 In my previous post I gave a more general overview of the chakras. Now, let’s break them down one spinning energy center at a time!

Your first chakra is also referred to as your Root Chakra and is often depicted as the color red. Just like red shows up on an energy spectrum, the energy stored in your Root Chakra is dense and slow relative to the vibrations and frequencies of the higher chakras. This is a downward shaped cone that connects with your sacrum at the base of your spine. So, the tip of the cone is at your sacrum and it opens up and gets larger in diameter the closer to the ground it gets. An easy way of picturing it is like a tail that grows between your legs.

The root chakra tends to carry some pretty primal/heavy/dense/grounded information. Survival stuff, health stuff, finances and fears. The more you spin this one out, the easier it is keep the flow of trust going and so we’re more connected to life and love and not fears or pain. It’s also associated with releasing unwanted energy and is our first energetic connection with our moms. Primal.

In Practice: Should our fears get the best of us, this chakra may slow down or stop spinning. Fear of being alone, fear of dying, fears of “not making it,” or financial insecurity are pretty common causes for Root Chakra pathologies. If you’re experiencing any sort of lower back pain, hip pain, or pain with pooping, spin your root chakra!

I’ll also often see some pretty intense injuries or health complications manifest when this chakra stagnates. Examples being a broken sacrum that kept a client in the hospital and then bed-ridden so he couldn’t walk, work, LIVE to his fullest capacity. On top of not getting paid during his recovery process, he was incurring tons of health expenses. Talk about facing one’s survival and financial fears! This is such a Root Chakra example! After a few sessions he admitted that he was totally giving up on life and fantasizing about death when his accident happened. “I don’t know that this is for me. I have no friends. I’m not making enough money. Life is too hard.” And boom and ouch, the injury! There are no coincidences. Should you find yourself thinking such thoughts, keep that Root Chakra spinning, pah-leeease!

We all get stuck, spinning our chakras will get us back in the flow and out of the rut. Simply draw your attention to your tailbone and imagine a red disc spinning clockwise now. It’s THAT easy! Energy follows intention. Doing this will prevent fear thoughts and help us trust and feel a bit more empowered in life.

Know what else naturally spins your Root Chakra? Tending to your health with fruits, veggies, exercise, getting to sleep before 11pm and sleeping for at least 8 hours. As will meditation, journaling and introspection. Do this for yourself to prevent life doing it for you with an injury or by loosing your job or something.

Facing our fears liberates us from them. One of my favorite exercises is to really go there with the worst case scenario. As a common example, if dying alone is your greatest fear set aside a good chunk of time to explore it. Light a candle and visualize yourself aging. Imagine not having any friends to help you out. Imagine not being able to afford the help you need to survive. Imagine dying alone.   Really go there. I know it sounds intense and I’m sure some of you are thinking no good can come of entertaining such morbid ideas. Hey, try it! What actually happens is that we defuse the charge of the fears. What we resist persists. Ignoring them will only feed them. Facing them neutralizes them so they’re not fears at all.

Gaining weight has always been my most daunting fear, with not being loved a close second. I took 3 days to myself to imagine myself obese and alone. We’re talking fetal position sobbing experiencing my own personal hell. I drew it out year by year. Saw myself at 40, 50, 60, 70, 80 getting less and less attractive. It was mortifying. But in the end …. it got hilarious!! I started laughing at myself! Such made-up lies I had invested sooo much energy in! And can we talk about First World problems? The fact that I’d actually have access to as much food to make me overweight is a luxury for sure! It really put things in perspective for me. I ended up getting fed up with myself and with feeling like a victim to life and coming out of it determined create my dream life!

I triple dog dare your to go there! And it’s because I love you and wish for you to be liberated from all that limits you. Lemme know what you uncover in the comments below! Remember to keep that Root spinning the entire time so you’re actually releasing your fears as they come up and not holding on to them, kk?

Testimonials that sparkle and shine

Learn about our Services